The initial meeting of the RECOLOR project was held 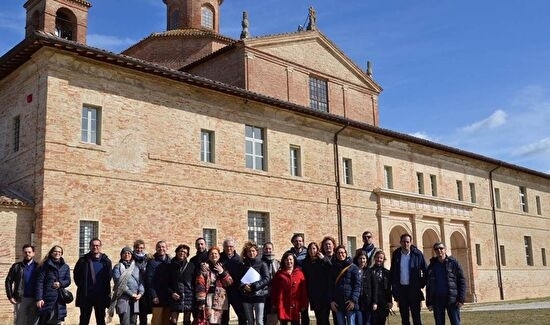 The initial meeting of the RECOLOR project was held

Organized by the Lead Partner, the initial meeting of the RECOLOR project was held from 4th to 5th March 2019 in Urbania (Italy)

As part of the implementation of the project "Reviving and EnhanCing artwOrks and Landscapes Of the adRiatic" acronym RECOLOR, organized by the lead partner, from 4th to 5th March 2019 in the city of Urbania (Italy) an initial meeting of the project was held.

Representative of the City of Zadar attended a meeting of the project Recolor, which implementation formally began on 1st January 2019. During the 30 months of implementation, the project will ensure valorization of cultural monuments that have not been included in tourist routes in the area of ​​RECOLOR partner cities. The project is co-financed from the Interreg Italy – Croatia 2014 – 2020 program.

On the first day of the official visit to the city of Urbania in central Italy, the project partners held a partnership and a meeting of the steering committee. At the meetings, in addition to getting to know each other, the upcoming activities were introduced, and part of the meeting was dedicated to administrative and financial issues related to the project.

On the second day of the visit, the hosts presented to the project partners the sites that will be valorized within the project, which, in their case, relate to the famous hills of the provinces of Pesaro and Urbino, and the province of Marche. The above-mentioned hills are found in certain paintings by the Italian artist Piero della Franscesca, which the hosts made excellent use of to promote their region through the story "Balconies of Piero della Franscesca".